Before jumping straight away into Reselect, there are certain other ways in optimizing React Redux applications.

This can help in avoiding re rendering unless and until there is a prop change which is consumed by the component.

According to the library’s homepage

Selectors can compute derived data, allowing Redux to store the minimal possible state. Which can be considered as keep the store as minimal as possible. Compute any derived data through the selectors.

Selectors are efficient. A selector is not recomputed unless one of its arguments change. A memoized selector that recalculates only when that part of the start tree changes which are input arguments to the selector. The value of selector doesn’t change when there is no change in other (unrelated) parts of the state tree.

In our context, selectors are nothing but functions which can compute or retrive data from the store. We usually fetch the state data using mapStateToProps function like this.

Where getActiveData will be a function which returns all the records from someData having the status as isActive .

The drawback with this function is, whenever any part of the state state updates, this function will recalculate this data. In this case the calculation might be a very simple filter function. But what if this calculation takes 2-3 seconds every single time when the redux store gets updated. That too neither of the state’s data and isActive doesn’t change. This is where Reselect comes to rescue. What Reselect does is unless the input parameters to the function doesn’t change, re calculation doesn’t happen.

How to write a ‘reselect’ selector ?

When we use Reselect it caches the input arguments to the memoized function. So only when the arguments of the function changes from the previous call, the selector recalculates.

The same with reselect will be

Reselect provides a createSelector API for creating memoized selectors. createSelector takes an array of input-selectors and a transform function as its arguments. If the values of the input selectors are the same as the previous call to the selector, it will return the previously computed value.

It displays the number of goals scored and the average rating awarded to the players in the last 100 matches . The UI has features like

Considering an API response like this, which is actually stored in Redux once fetched. For Each player the last 100 match data will be having a structure like 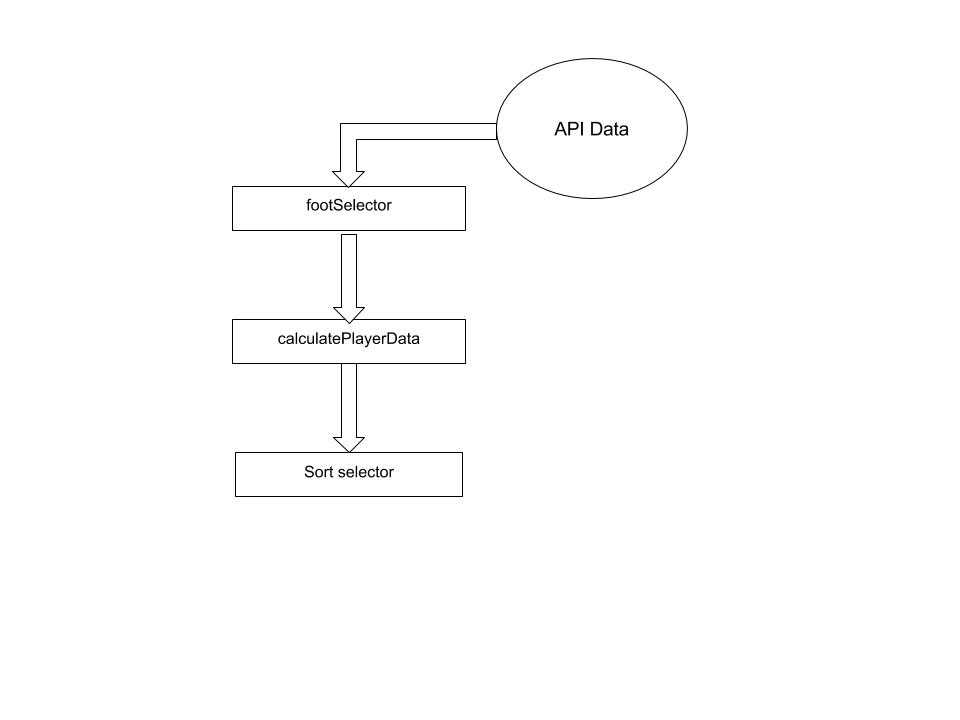 And when there is no change in any of these data the output to the UI remains the same (from cached result). We will assume the redux store is maintained in immutable JS. (Refer How to use immutable JS in a React Redux application ).

So in code the above selectors will be

Similarly we can write a sortSelector which will take calculatePlayerData as input and return the data sorted based on the selected criteria.

How this is different from calculation in the view ?

The calculation logic remains the same as we generally do it in the view (component). What changes here is we calculate it once for the same input and keep it cached unless the input changes. Also if we are making a sequence of selectors as shown in the example, it re calculates from the selector whose input is actually changed (For example when footSelector’s parameters are changed it re renders)

Expensive calculations: In case of very expensive calculation the view might actually display with the older data, taking time to display the new data. From UI perspective we might feel that it was laggy. In these cases we can write another selector which handles whether the data recalculation part is actually completed or not. Depending upon the calculation status we can render a Preloader.

So I have redux store, internal state, selectors and view. Where to store my data?

Keep the redux store as minimal as possible. A bloated state might actually make your app slow. Try to keep view as a direct representation of the data passed through props. You guessed it correctly, use functional components as much as possible with calculations performed inside selectors (Separation of concerns).

Written by
Prasanna
Published at
Sep 10, 2017
Posted in
Tutorial
If you want to get more posts like this, join our newsletter