Comparison of form libraries in react

With React JS community on a journey to conquer the best front-end development Javascript framework, the easiness in handling HTML forms in React is one of the most important aspect. Talking about forms in react, as default they have provided us with an option to create controlled and uncontrolled input components. But that does not provide us with a full fledged solution to have a complete and comprehensive module for handling everything related to forms such as Form Validation and error Handling, Handling form submissions, Easiness in creating custom components. We being one of the best React JS development service company have a good experience with how to handle forms.

Look at how we create React Applications in a better way by abstracting these Form libraries.

How to choose the best form library?

Various form libraries in React have evolved to greater extent which solves most of our common problems. Some open source enthusiast and react geeks came up with their own ideas of having a library which will not only handle above mentioned features but also will help us write our own custom input components letting us control their design, behaviour and presentation of the entire form. Choosing the right form library for our application depends on

Formsy React – “The main concept is that forms, inputs and validation is done very differently across developers and projects. This extension to React JS aims to be that “sweet spot” between flexibility and reusability.”

Redux Forms– “Redux Form works with React Redux to enable an html form in React to use Redux to store all of its state.”

Formik – “Formik will keep things organized–making testing, refactoring, and reasoning about your forms a breeze.”

Although there are many such libraries we restrict ourselves to comparing two of the most commonly used libraries Formsy React and Redux Forms. Most of the other libraries works on a common principle. So choosing the right one will be an easier task if we understand the work flow of each library.

Formsy React was once most popular and most promising solution for most of the problems related to forms. Redux Forms was extending the support of redux in our applications to forms and maintaining the data of all the forms in the app. Apart from being most popular, Redux Form and Formsy React have more things in common. The only thing which isn’t common is the approach with which developer integrates with their React Project and also the way they manage the data from forms. 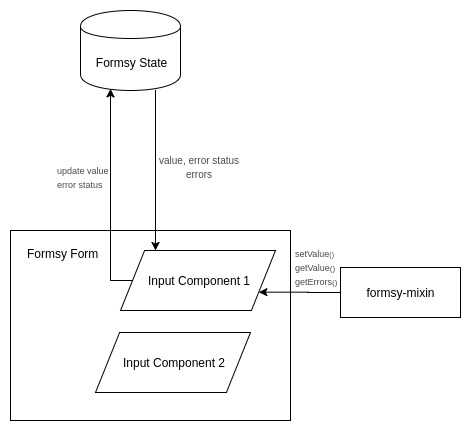 Formsy architecture is pretty simple and direct, Input components inside formsy form are provided with get__() and set__() methods from formsy mixin (or HOC in case of ES6). Using get and set methods we can communicate the data of the form with the library. 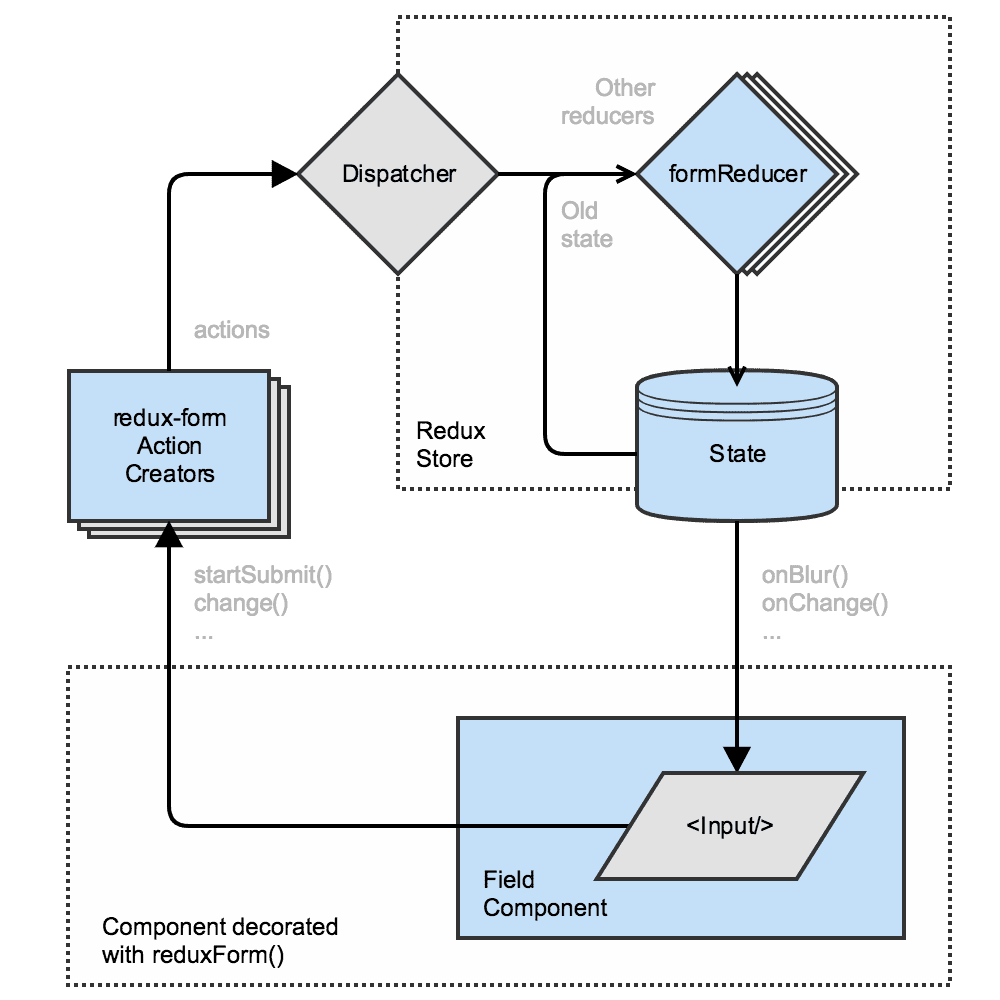 Setting Up in a project

Well one of the few benefits of Formsy is that there is no need of setting it up anywhere in the application. We can directly import Formsy.Form and use it with their custom input components.

In case of Redux form we need to have a form reducer to handle all data related to any form in the app.

Building a simple form with one input and one submit itself brings out a lot of differences between libraries.

Formsy provides callbacks for all the form related events such as when form becomes valid, invalid or pristine and over those callbacks we can define the behaviour of our components.

Redux forms is similar to Formsy in terms of providing callbacks through HOC. The only difference is these callbacks dispatches an action to the store unlike Formsy .

We can switch to stateless component while working with Redux Form, with Formsy this isn’t possible as every event we have to modify the local state of the form to get changes reflected over the children components.

Also it took around 40 lines for use to write one simple form with formsy whereas with Redux form it just took 15 lines of code.

Most of the modern web applications have variety of inputs like Date Range Picker, Range Selector etc. Easiness in Creating custom inputs with these libraries is one of the most important features for any such libraries.

Formsy either through mixin (since it still believes in ages old es5 syntax) or through HOC provides all the states about input and values provides through methods such as getValue, showError, getErrorMessage.

On the other hand Redux Form provides the state of field and input element through props either in meta prop object or in input prop object to their input.

Comparison of how to update the state in on change in the value from the input element is given below as example.

Sending back the value to formsy state is the biggest pain, as for doing it we need to use setValue method (provided by mixin or HOC), and not only this we also have to call onChange method provided as prop to the custom Input element, which does the needful change as value updates.

Whereas in Redux Form this is much easier and clean.

Formsy have a very good range of built in validations, such as isEmail, isUrl, isAlphaNumeric, isLength. Also some of them lets us compare values with other fields or even some fixed values. They can be used in this way.

But this has a disadvantage as to provide validation error one more prop i.e validationError needs to be passed which will pass the error message to component. Usage given below:

The above code will pass an error message on failure of the validation.

Redux Form Unfortunately the Redux Form API does not gives us any built-in validations so for everything we will have to either use some external dependencies or have to define our own JSON structure for each field. This one of the minor drawback that Redux Form.

Redux Form provide two major methods for validating values filled by the user in the form.

Field level validation where to each field can be provided with a validation method to validate that particular field with returning value as either error message or undefined if value is valid.

In Redux Form async validation can be done at the field level in redux forms, eg: for checking the availability of user name while as soon as the particular field is blurred.

Initializing forms with values not only helps us to propagate some default values for the fields but also it helps us in pre-populate the values which are dependent on some other actions and also lets us build editing forms pre-filled with old values.

Formsy API does not let us initialize form with passing of one single prop to form object, but each component needs to be passed with initial value separately.

Initializing Redux form is possible but only by passing the initialValues prop to HOC component or passing in reduxForm options argument. Initializing fields individually is not possible in Redux Form because Field component doesn’t not support value prop.

Interaction between elements is an essential features which let us pre-fill values which are dependent on any other form element or also lets us to show preview of value, which was split in two or more sub values, as one. Example choosing a gender might change the options for upcoming values or address field can be split into address line 1, address line 2, city, etc.

Formsy Using value of one input in another can be achieved using getModal available through Formsy.Form instance.

Redux Form In Redux Form there are numerous ways to get value of any input that entered by the user. There are selectors, direct methods which gives us access to the entered values and other than the mechanisms provided by the redux-form package since all the values are present in redux store we can access them whenever we want by subscribing to the store for that.

One of the methods i.e is using formValueSelector is given below:

Both formsy and redux-form have their own merits and de-merits. In terms of support from open source community Formsy is ahead of Redux Form probably due to one fact that former came long before than later one, for example formsy has formsy-react-components, formsy-react-validations, formsy-material-ui and redux-form lacks in this regard and have vey few such as redux-form-validators, redux-form-validation. Redux Form as we per our experience is very much adaptable and flexible as compared to Formsy.

Formsy is not dependent on any external storage library (Everything is present in HOC) whereas Redux Form as name suggest is nothing without redux, a module which has got merits and de-merits of its own.

Trying out both of these form libraries in React will help in identifying the right choice for the right use case.

Written by
Anushul Sahni
Published at
Aug 21, 2017
Posted in
Development
If you want to get more posts like this, join our newsletter